Hijama is a method of healing recommended by the Prophet Muhammad (PBUH) , Hijama is highly beneficial when performed right , it can - By the will of Allah - Get rid of a lots of health problems.

Hijama / Alhijamah is an Islamic arabic word for wet cupping where Superficial / Capillary blood is drawn by applying a Negative Pressure on a small shallow skin incisions. Alhijamah can be performed almost anywhere on the body , often at the site of an ache or pain in order to ease or alleviate it.

Anas Ibn Maalik (may Allah be pleased with him) reported that the messenger (PBUH) said "Indeed the best of remedies you have is alhijamah" [saheeh albukharee (5371)].

Abu Hurairah r.a. Reported that the messenger (PBUH) said "If there was something excellent to be used as a remedy then it is alhijamah" [Saheeh sunsn abi dawood (3857)].

Abd allah inb abbas r.a. reported that the messenger (PBUH) said "I do not pass by an angle from the angles on the night journey except that they all said to me : Upon you is alhijamah O muhammad" [Saheh sunsn ibn maajah(3477)].

Narrated Abu Hurairah (radi Allah anah) that the Prophet (PBUH) said "There is no disease that Allah has sent down except that He also sent down its cure" [the book of medicine : saheeh albukari].

here are total 9 points of the body where prophet Muhammad (PBUH) were performed hijama , These are the sunnah points of hijama.

The Difference Between Hijama and Blood Donation:

Blood donation comes straight from the blood circulation lowering red and white blood cells and the fighting ability to the body and the oxygen supply to the cells and organs.

Hijama is an interstitial , inflammatory fluid and some superficial capillary blood that filled with dead blood cells , cell excretion(waste products) that cause pain and sickness and form an acidic pool that kills live cells in the inflammatory area hindering blood circulation and lymphatic drainage . The body need to get rid of those fluids in order for the self body healing mechanism to work fast to relief pain and repair damaged tissues.

No Showers right before hijama.

Preferable last meal 2-3 hours before Hijama {Alhijamah on an empty stomach is best}.

Wear loose clothing (according to the weather).

Please Let us know if you have any form of allergy , Skin sensitivity, Keloid,  fainting, seizure, Vasovagal attack or any ill-health condition.

What to Expect During Alhijamah Session:

​Expect to spend about 45 minutes to an hour or more.

In the day of Hijama eat an easily digested natural foods , fruits and vegetables.

Please Let us know of any medications , supplements or diet program that you're on or had been taken recently.

Avoid taking Hot showers and heavy meals  for the next 24 hours.

Light walk after Hijama is Preferable.

Avoid Driving if you feel dizzy (Have a sweet drink after hijama).

Applying a touch of E.V.olive oil on hijama spots after 24 hours is preferable. 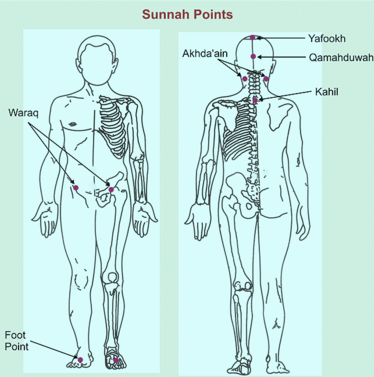